Having played for eleven years at most of Melbourneâ€™sÂ venues, The Daimon Brunton Quartet is one of the cityâ€™s most hard-working and popular small jazz groups. Their 2003 CD, Never Again Such Beauty, was available only at gigs and was a hit with the groupâ€™s many loyal fans. 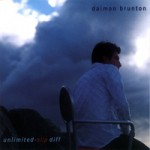 Unlimited Slip-Diff explores new directions made possible by fusing jazz harmonies with funk and hip-hop grooves. Eleven of the twelve numbers are original compositions or original arrangements and four tracks utilize two drummers simultaneously. The two covers/arrangements of the Flintstones Theme and the Sesame Street Theme are smokinâ€™ groove driven charts that will have your toe tapping instantly. The Sesame Street track is the very first recorded take. It steams away at over 170 beats per minute and with the funky trumpet lead, two drummers screaming simultaneously, the Wurlitzer organ wailing and the guitar chompinâ€™ at the bit this track will having you begging for more.

The final original, O Thankyou Lord is a 16 Bar, trad/stomping blues which calls for a New Orleans setting and a serve of fried chicken to seal the deal. With no over-dubbing or fancy technological tricks Unlimited Slip-Diff really is a live gig recorded in a studio. Itâ€™s filled with energy and raw emotion.