Although initially under the guise of ‘Jazz Deliverance’, ‘The Daimon Brunton Quartet’ was born in mid-1996. From January 1997 the band began working professionally and has been gigging ceaselessly ever since. 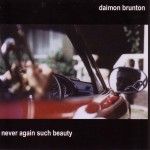 In 2003 the band went into the studio and recorded its first album ‘Never Again Such Beauty’ (now under the Daimon Brunton name). Although a distribution agreement had been reached, Daimon decided against this path at the eleventh hour and the album was only ever sold at gigs. 550 units were produced and there are no plans for more. This made ‘Never Again Such Beauty’ somewhat of a collectors item among fans.

The album begins with a lamenting piano and trumpet duet, ‘Never Again Such Beauty’ and concludes with the gospel inspired ‘And We’re Going To Church’. These originals are interspersed with standards such as Miles Davis’ ‘Seven Steps To Heaven’, Clifford Brown’s ‘Gertrude’s Bounce’ and Thelonious Monk’s ‘Well You Needn’t’.

Between the years of 1996 and 2002 the band’s personnel was extremely stable and they had been delving into the enormous back-catalogue of jazz standards and writing diverse sounding originals. ‘Never Again Such Beauty’ is a combination of classic jazz standards and the cream of the originals written in that period.

Some fans believe that ‘Never Again Such Beauty’ is the best of the three albums so far. One fan said that there was something about it he couldn’t get away from and he listened to it for three months continuously.

Whatever you make of it there is no denying that this limited, somewhat private, release was the launch pad for the future success of ‘The Daimon Brunton Quartet’ and paved the way for ‘Unlimited-Slip Diff’ and ‘My Favourite Things’.